The Multi-wave Oscillator (MWO) generates an electrical field that many feel has healing qualities.

Have you ever wondered what it would be like to be treated with healing frequencies instead of drugs? Using its many different frequencies the Multi-wave Oscillator elicits an overall rejuvenation effect on our cells.

HOW? Do you ask?
By forcing each cell to resonate according to its own original (youthful) structure as a tuned circuit. 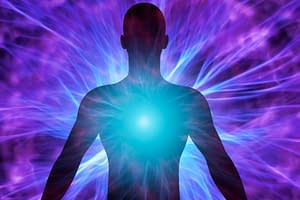 History and science behind the Multi-Wave Oscillator

Over 100 years ago a Russian engineer named George Lakhovsky discovered something that was truly astonishing.

The cells of disease causing agents within a sick person produce different frequencies than that of normal healthy cells.

Lakhovsky also theorized that each cell also has characteristics which normally are associated with electronic circuits.  These include resistance, capacitance and inductance.  Also, the double helix of the DNA in each cell acts as an antenna to “capture” the proper frequency for that cell.

The MWO radiates a plethora of different frequencies so that each cell in the body can find its own natural frequency (of health) and resonate to it. It tunes the cells while at the same time purging toxins.

Research showed that all patients treated that exhibited improvement (greater than 90%) have remained well and no recurrence of the original affliction has been reported.

*Of course, everyone is unique and use of the Multi-wave Oscillator is at each person’s risk with no guarantee of outcome.

* 15 minutes is the recommended amount of time to use the MWO. The body must be given time to calibrate and detox.
* Package programs are based on a recommended 2 times per week protocol. Daily use is also safe.

PLEASE NOTE: People with implanted electronic devices, such as pacemakers cannot use the MWO. It generates a high-intensity field that will damage electronic devices if they are in the field for an extended amount of time.

All Cancer Boot Camp patients both current and returning have use of the MWO, free of charge, as part of their treatment protocol.

Exposure to Pulsed Electromagnetic Field Therapy or PEMF therapy, on the mat, creates the same effects as exposure to the magnetic field fluctuations of the planet earth.

Scientists have learned that the frequencies of these fluctuations exactly match those of our brain waves measured on the electroencephalograph (EEG).

It turns out that we synchronize with these fluctuations even before we are born.  They are required for our health both physical and mental/emotional.

The problem is that the magnetic field of the earth has lost strength in the last 50 years.

Exposure to PEMF’s through the use of the mat restores these specific frequencies that are required for health and healing.

The Multi-Wave Oscillator conversely exposes every single one of the trillions of cells in our body to its individual “resonant frequency”.  There is no way to know exactly which frequency each cell wants to vibrate at.  Only the use of harmonics can provide the full range of choices for each cell.

This helps each cell restore its own health by being able to return to the frequency that allows it to be healthy.  As previously covered, cellular health equals body health.  These frequencies are different from the frequencies of the earth.

Combination of MWO and PEMF

The combination of both these therapies provides the biggest menu for the tissues, organs and cells of the body to choose the optimal vibration for the return to health and wellness of the body.